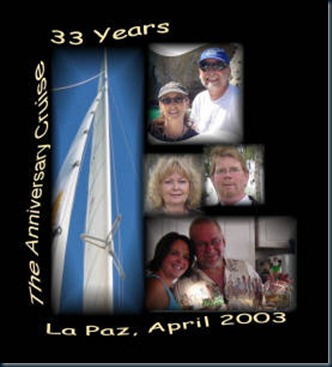 Gato Loco is on the move again.
Lowell and Frankie are taking
close friends Walt and Kathy
and Murril and Al to La Paz

for a week of Baja adventure.
We plan on spending time sailing
the islands near La Paz. We will
also spend time sight seeing in

the the area. We are flying
Alaska Air to San Jose Del Cabo
on April 4th and load gear in a
mini van for adventures to La
Paz. We will spend a day or two
getting to know the city before
heading out for the islands.

The 1st week of April is cruisers race week in La Paz so there will be
lots of boats in the area. This should be a great chance to spend time
with fellow sailors. Since this is the time of year for Lowell and
Frankie’s anniversary and birthdays there will a few celabrations
including spending our last night in a nice resort in the Cabo area.

We moving from using a Sat phone to using a cell phone to try to send
emails. This should work so expect to receive emails on the trip.

We’ve also been working on the Gato Loco web site. More information
and pictures. Check it out at: www.GatoLocoSailing.com…

Until the first report in April…

Yes today is Frankie’s day. I’m sure activities will be organized around making it a special day for her. More news on this later.

The trip to La Paz went smooth. Murril and Al arrived before us and had the mini-van waiting as we cleared customs. We decided to take the highway through the mountains to La Paz. Great views. Thoughts of Bill’s highspeed taxi ride from hell trying to make his flight in Cabo made us smile… 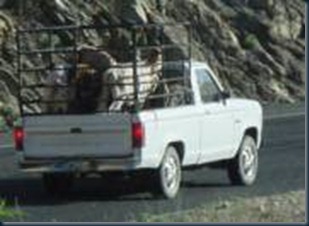 Some local traffic slowed us done on the way to La Paz.

Hello to the Chica’s!!

Hello to the grand kids… 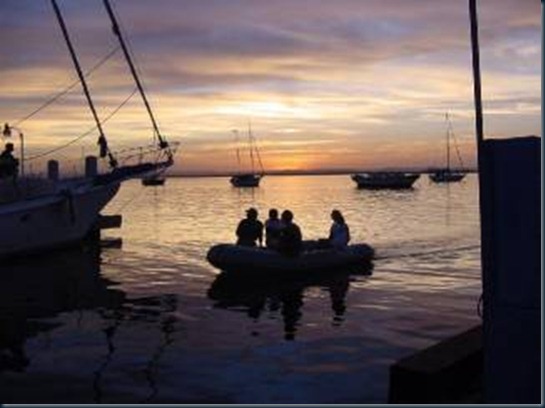 Yesterday we eased into our new pace. Breakfast at the marina café on the water then on to a mega mercardo (soriana’s) for previsions.

We had a great dinner on the boat last night with a colorful sunset. Will decide today if we stay another night in the marina or move on to our first anchorage.

Weather is perfect but it’s getting very windy today (20kts) so I bet the wind will keep us in the marina until tomorrow.

Next update from the islands. 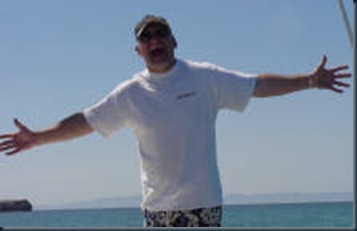 We moved to daylight savings time Sunday
morning so it’s hard to get rolling in the mornings.
Finally got up about 8:30 with hopes to sail out by
9:30. Lowell spent an hour or so trying to get the
cell phone working. A trip to the nearby TelCel
office, they said it was fixed, so back to the boat
with hopes of sending e-mail, but still the phone
she no work. Anyway, we finally motored out by
10:30 with winds up at 12kts in out face. 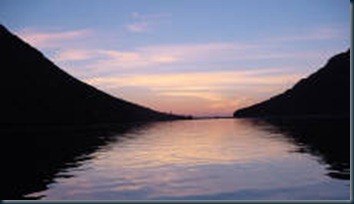 Wind cracked up to 20 and seas built as we
headed north into the wind. This is Murril, Al, Walt
and Kathy’s first heavy air sail. Everybody did
well.. As we approached the channel winds
became shifty with rough seas so we powered up
the motors to move quickly to the lee of the island
and smooth things out. We motor sailed up to Isla
Gallo and sailed back to a potential anchorage.
On the way in Walt had a hookup on the troll line.
He was able to get it to the steps as we counted
the number of servings the fish would make and 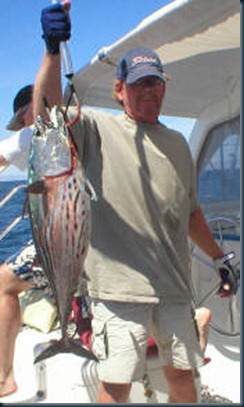 DAM he got away!!! I guess we’ll starve tonight.

After spending an hour on anchor we were eaten
alive by flies so we pulled anchor and moved to
Caleta Partida.

Pulling into Catela bay we counted 19 boats. Most
boats are here for the 1st annual "Island
Madness", A week of boating and beach activities.
We had a good dinner (without fish!) and could not
muster enough energy to go ashore. Winds laid
down for a quiet night. Cool temps
perfect for sleeping.

Walt and his big fish 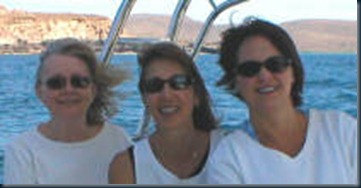 This morning Murril treated us all to banana
pancakes and scrambled eggs, what a great way
to start the day. With out Murril and Al’s cooking
we’d be eating licorice and cookies. We listened
to the morning net and found that many activites
were going on at the "Island Madness" so we
decide to sail and return later today. 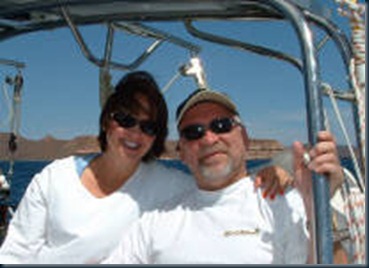 After a quick clean we got under way for a sail to
the northen tip of Partida, hoping to catch tonights
dinner as we go. Not to far from our anchorage
point Walt hooked up with his first catch of the
day, we think it was a sea trout??? As we
continued on our journey shall I say Walt had BIG
FUN. Two major strikes on the troll line both
getting free, one so big it actually broke the hook.
Finally success, he landed a 20+ lbs fish. What a
fight, we had just picked up some good winds
when, bam, dinner. Lowell quickly brought Gato
Loco to a slow sail as Murril and Walt fought to
bring the monster on board. Once on the boat they
had their hands full cleaning a good size fish.
Looks like a great dinner tonight. 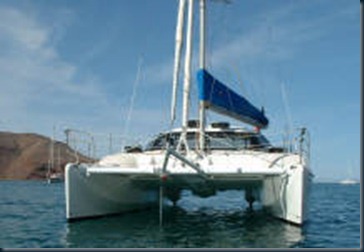 We returned to the bay for a relaxing afternoon.
Poor little dingy carried six of us to shore to
Paridise lost beach bar errected for the week long
activity. Many salty characters and a friendly lot…

Gato Loco at anchor in Partida

Our last day on Gato Loco 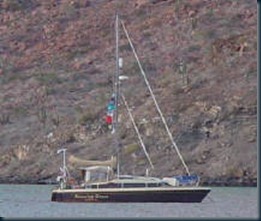 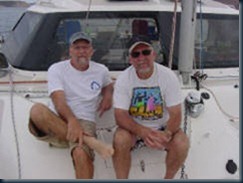 Murril and Al served up a great dinner last night. Walt’s fish was disappointing.
We need to know more on how to fix ahai.. Another perfect weather day and night
(low 60s at night with light winds during the night). The whole bay slept in late
since the beach bar went late. We motored out around 9:30 heading back to La
Paz. 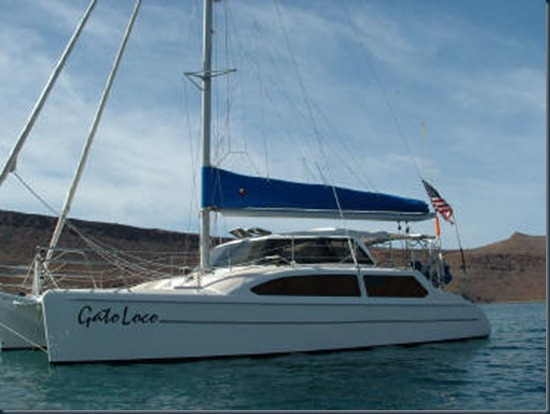 11:30 Wind is building. Weather news is
northerners have laid down and light winds
will prevail.

3:30 pm Motor sailed with light winds until
we reached the La Paz channel and then
like clock work winds increased to 10-
15kts. Running with the wind was a little
warm. Thankfully skies went overcast which
helped to keep the temp down. Looks like
we will be back in the slip at 4.

Back in Marina La Paz as planned. Quick
order we had boat cleaned and were out
on the town.. Oh yes Lowell make it to
TelCel and thinks he has the phone fixed.

We had a great dinner at El Taste and walk on the Malocon (ocean
side walk). Later Lowell and Walt slipped away to the internet bar
near the marina to send some emails. No luck getting email to work
with the cell phone.

Woke to overcast skies and light rain as we closed the boat. We will
move to Cabo by car today stopping at Todos Santos for lunch.
Everybody had a good time sailing and now we will relax around a
pool for our last day. 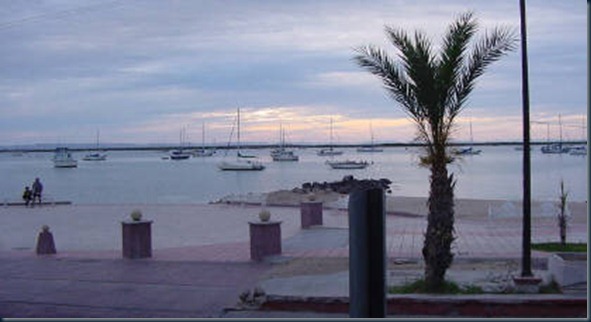 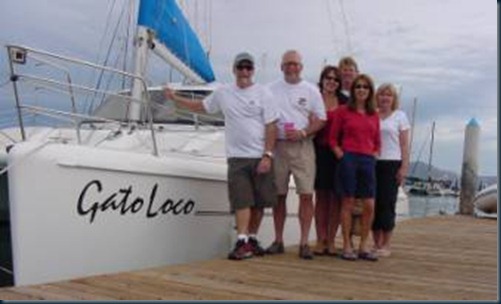 The Anniversary crew as we depart from Gato Loco. A nice cool morning starting with some rain. We’re on our way to Cabo Real on the Sea of Cortez 20 miles north of cape.

Todos Santos was our first stop. Hotel California caught our eye as we drove in to town. 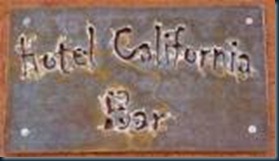 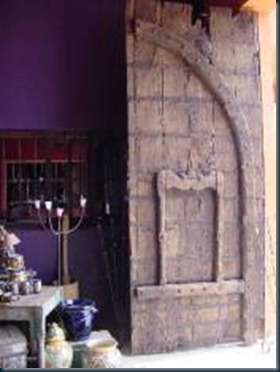 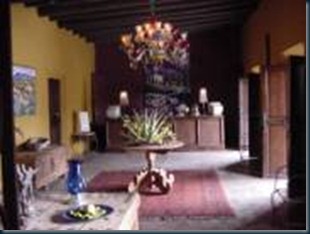 Beautiful old hotel built in 1928. We enjoyed the ambiance so much we decide to have lunch. Lunch was as good as the hotel looked. 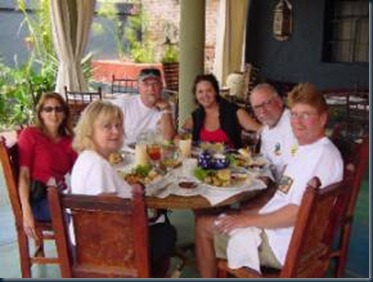 Lunch in the courtyard 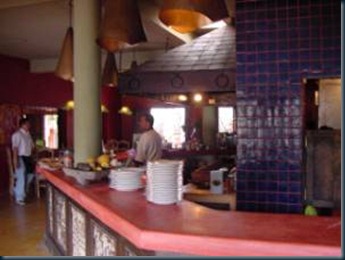 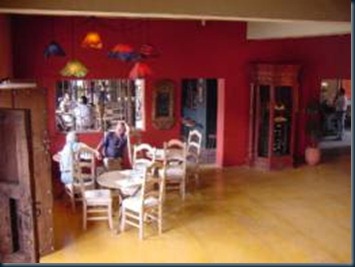 From Todos Santos we cruised on to Melici Cabo Real. We made beeline to the pool and Jacuzzi. 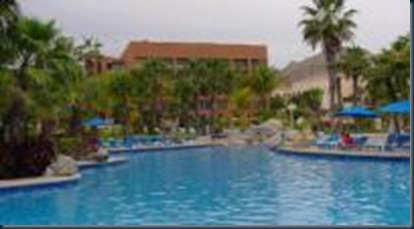 Al jumped in the Jacuzzi and was determined to become a prune.

Frankie and I took a walk on the beach. They have a breakwater to create a good swimming area. 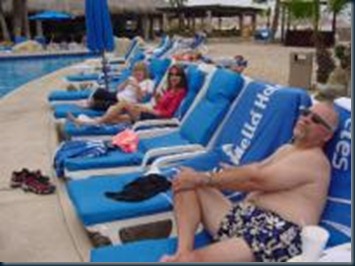 Murril in search of Sun

Of course we had to spend our last night in downtown Cabo. On the way we stopped by “The Trailer Park” restaurant recommended by everybody. We were a little surprised that it was a small pool side restaurant that had killer lobster. We all treated ourselves to a lobster dinner. 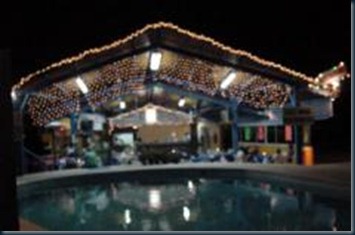 We make our rounds, Cabo Wabo, Giggling Marlin and we saved the last stand for Squid Roe.

On the dance floor Squid Roe

Friday we visited San Jose Del Cabo on our way to the airport. Less touristy where a lot of the working class lives. Walt finally found the baseball hat he had been looking for. 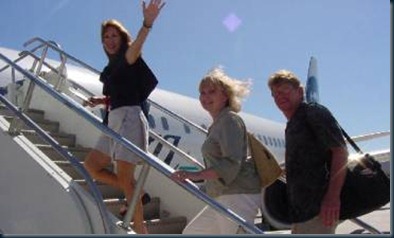 On our way home

We hope to move Gato Loco here this summer.

Until the next one.

4 thoughts on “The Anniversary Cruise–33 Years”