Gato Loco on the way to Bahia Los Angeles

It’s been a tough cruise J Bill was up ‘til 2:00 am and then turned over the sails to Carlton who sailed to sunrise. The communications officer got to sleep all night since she has such an important job she must get plenty of rest. 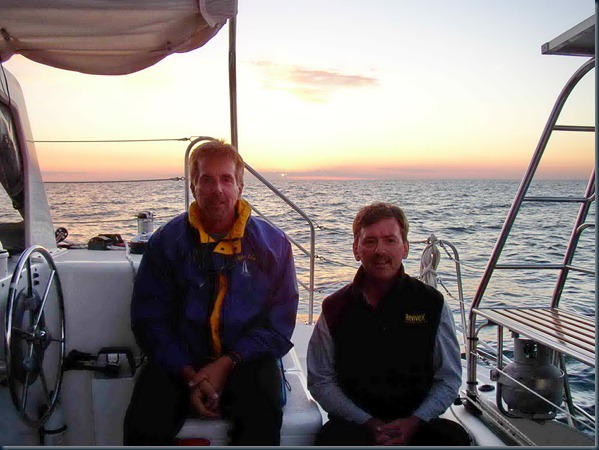 We drank bloody Mary’s this morning and watched at least a 1000 porpoises in the area…some off on the horizon and some swimming between our hulls.

We sailed in 15 knot winds until 5:40 pm last night and then as the sunset, so did the wind. We motored the rest of the night.

This was our attempt at getting a picture of the thousands of porpoises (By the way, the Communications Officer is not responsible for the quality of our photos.

Until the next update….

Gato Loco on the way to Bahia De Los Angeles 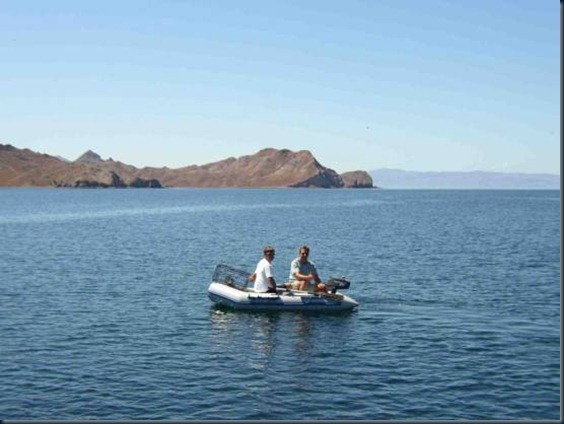 Last night we saw the moon rise while the sun set and this morning we saw the sun rise while the moon set. Bill whooped us in the evil Grandma’s game. Tonight will be Carlton and Beth’s revenge. We are cooking Fish in Crazy Water tonight. We will let you know if it is a recipe of choice. We leave for Bahia De Los Angeles tomorrow, early.

We’ve had a lovely day in Refugio Bay. Bill is drinking martinis and talking to the Seagulls. The seagulls want the guts from our fish. Not much luck fishing on the way here but early evening was very fruitful…trolling in the dinghy. Carlton and Bill went out on the dinghy to set our lobster/crab trap. We have high expectations for tomorrow morning. We snorkled and saw some garibaldi (sp?) The fish were so thick the depth alarm continually went off. Carlton got the crabs…off the rock where we were snorkeling. 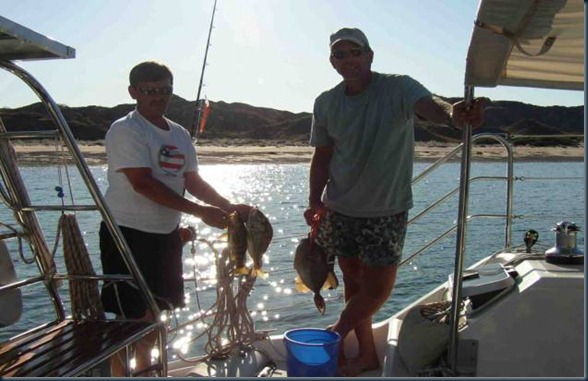 Gato Loco on the way to Bahia De Los Angeles 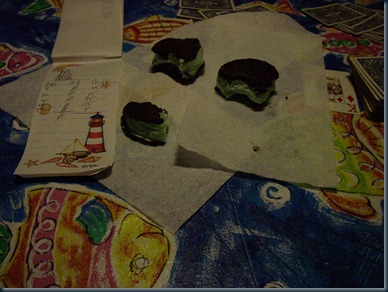 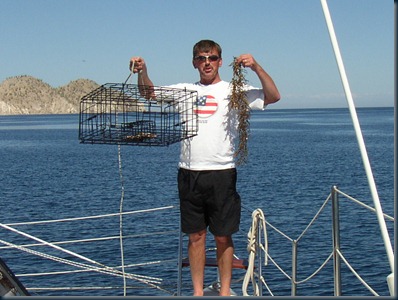 Hola from the Sea of Cortez. We’ve had another fun

filled evening and day. Lowell, I think I finally figured out how to reduce the picture size!

We had a great fish dinner and then our Skinny Cows (the green and chocolate things in the picture). Carlton and I whooped Bill at cards and he had to do the dishes )-: Note Bill’s score on the scorecard in the icecream picture…he was very proud at first.

We saw a whale today. That was a very exciting event…too far away to photograph though. You can see from the picture that the crabbing business is not going well. I guess we will have to return to work afterall.

Until the next update… 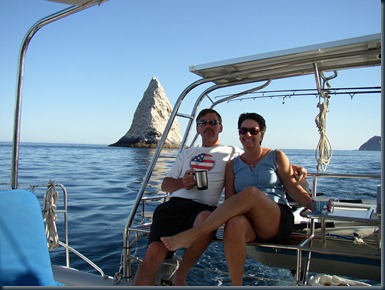 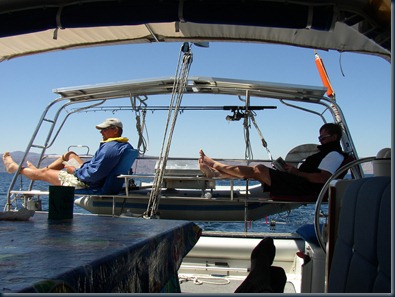 From Bill the daily sailing news: We came out of Refugio with 25 knots of wind on our nose. Riding strong currents through most of the day. Tacking up the west wall to stay with the strong winds.

Newsletter from the Sea of Cor-tales

We sailed into Bahia De Los Angeles just after sunset last night. We saw another whale after we sent our last update. It took us a little off of our path even though we were running a little late but it was whale worth it. We saw three more whales today! Still too far off to take pictures but you can still see how massive they are. We took the dinghy into the launch ramp and walked about town to scope our supplies. Nothing available that night…all closed. We did get to have that margarita at Guillermos though. They were as good as you said they would be Frankie. Bill and Carlton started the day scraping the bottom of the boat so we could go faster and use less fuel. They at least got their morning workout before participating in the Galley Goodies. We went to town shortly after they finished their chore to get gas and ice. The nice young man at the gas station gave us a ride back to the launch ramp in the back of his flatbed so we didn’t have to carry the gas and ice back through town. We left Bahia LA this morning at 8:45 with 15 knots of wind. Shortly thereafter we hit some pretty good winds and we (used loosely) had the boat going 12.5 knots. You can see from the above photo that the Captain needed some R&R after that stint.

Fishing hasn’t been too good except for in the dinghy at our first camp. We hadn’t reeled in anything from trolling while we sail except for this fish photo above. Bill is still reeling in the BIG one…we are anxiously awaiting its arrival. 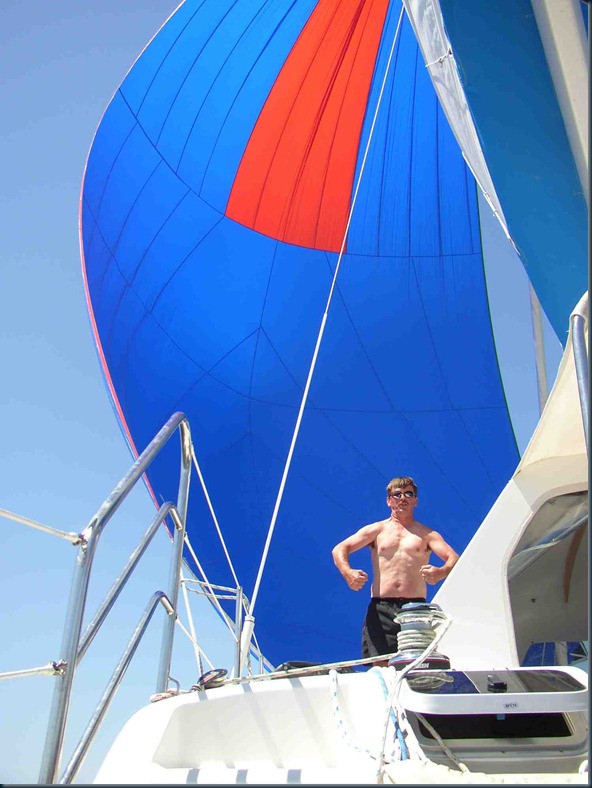 We are working so hard that our appetites seem to have become rather large. We began today with Eggs Benedict and Mimosas, then for lunch we had prime rib dips, tonight we have flaming pork peaches for dinner. Dessert will be fresh strawberries and cream. I am sure we will work it off tomorrow with another strenuous day.

We have hardly seen any other boats. A few around Bahia De Los Angeles and Carlton and Bill each saw one on the all-night trip across. Otherwise NO BOATS! Unbelievable.