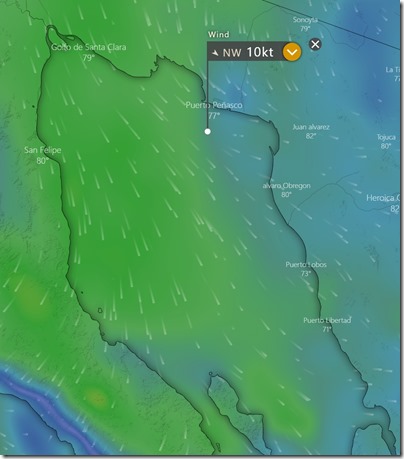 Our departure finds Arizona with weather creating strong winds. There’s Arizona forest fires being fueled by strong winds. One fire is only 10 miles from our Prescott cabin and the other is in Flagstaff and burned through Dave’s neighborhood. We’ll be keeping a close eye on progress to control the fires and a huge thanks to the crews fighting them. We hope to manage these winds to get a nice cruise south. The Windy weather pic right shows winds at our planned Sunday early morning departure. Winds are forecasted to build in the day. Based on these conditions we’ll most likely head south to Puerto Lobos avoiding the center of the Sea where waves could be significant and uncomfortable. Monday and Tuesday have favorable winds and then the winds will turn lighter.

The leg 1 crew will meet up at Sky Harbor Saturday morning picking up Murril, Rick and Chris and head to Peansco arriving early afternoon. 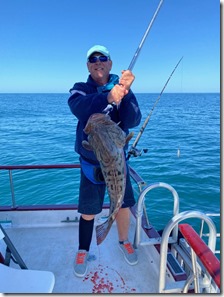 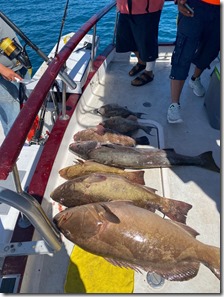 As a special treat our Leg 2 Crew Ed was out fishing this week and came home with a cooler full including the large grouper he’s holding in the photo left. Ed and Marcia are cooking up a awesome meal for our last night on shore. What a treat. Maybe there’s some for Gato Loco’s stores if we’re lucky.

We were hoping to head to the Baja Gonzaga area on our way south. Winds will probably have the sea state high to make a western sea crossing so we’ll probably head to Puerto Lobos and then see how waves look for making the crossing to Puerto Refugio on Angel Island.

The google earth map right is our most probable route south.

Winds continue to be a concern but things seem to lighting up this evening making our departure tomorrow looking good. A big thank you to Ed and Marcia for the super grouper dinner they hosted tonight. With a full belly the Gato crew retires tonight ready for a 6 AM departure tomorrow morning.

Sunday morning and the cruise begins. Winds are north north west and lighter this morning. Sea have flatten considerable. Weather is perfect. A radio call to Villa in Cholla and he reports we will have stronger winds this afternoon.

Puerto Lobos is our destination today. We should have cell service so maybe another update later. All good on Gato Loco.